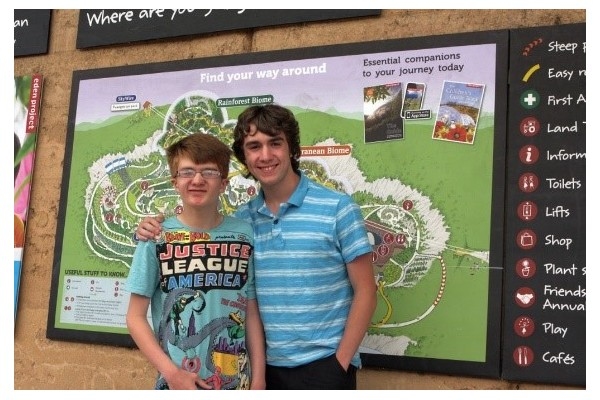 Jake shared this story about his family with classmates at school, when he was 15 and Owen was 13

My family is different. We're different because of my brother Owen. Owen is a lively young man, who loves trains and Manchester United, he also has autism and is learning disabled. This means that although, for the most part, we have a fairly normal sibling relationship there are a few key differences. One of the main ones is that I have to be a lot more responsible for Owen than you would need to be for an average younger brother. For example, I sometimes need to help Owen get dressed and often have to translate because his speech impediment means it's not always easy to tell what he's saying.

I'm not the only person in this situation, across the UK there are over half a million people under 18 with disabled siblings, and there's no typical case. There are so many different disabilities that every case is unique and can affect the sibling in almost every aspect of their life, from their social life to their school work.

Many, if not most, young carers sometimes feel that they don't get enough attention from their parents and often don't receive accurate or appropriate information about their siblings disability; This can lead to children not understanding what's "wrong" with their sibling and taking things personally if they lash out or break their things. Siblings also often feel isolated and think that there isn't anyone else who understands. They often find it difficult to make friends and don't invite friends over as they can be embarrassed by their disabled brother or sister or worried about what their friends will think.

Being a sibling of a child with disabilities also has its benefits. siblings of disabled children are often very mature for their age and are more understanding of difference in other people. However, as I have said, those benefits aren't without their cost.

As I'm sure you've gathered, Owen's disabilities have not made life any easier for me, but some people are in a situation that I can only imagine. Owen is my little brother and as such it is not hard for me to look after him in the way that I do but for some people it's their older sibling who is disabled. How confusing must that be? How are you supposed to treat them? Another difficulty of having an older disabled sibling is that the younger brother or sister sometimes doesn't get to grow up, it can be hard for the parents to accept that the child has overtaken their older sibling and therefore treat them as if they were younger than they are. While, being Owen's older brother, I don't know first hand how difficult this can be, I do know something of the challenges it presents thanks to my brother Eliot. Eliot is the youngest in our family and therefore we expect him to treat Owen as his older brother but that's difficult when, in many ways, Eliot is much more able than Owen. Unfortunately for Eliot, Owen understands that he's older and that therefore Eliot should, to an extent, do as he says. As you can imagine this leads to numerous arguments as they both try to play the role of the older brother.

I said earlier that my brother has autism and is learning disabled. I imagine that the  majority of you won't really know what that means, so I suppose I ought to offer some explanation as to what that entails. Autism is a disability that typically affects three things; Imagination, communication and social interaction. The imagination side is to do with rigidity of thought, it means that people with autism tend to find it difficult to do things that are not part of their normal routine.  It also means they sometimes can't understand people having ideas that are different to theirs.

Communication difficulties include difficulties expressing themselves and taking things very literally. Finally, the social difficulties mean that people with autism don't understand the need for social interaction and find it hard to understand emotional responses. Owen's learning difficulties are caused by a duplication of chromosome 1, this means he finds some things hard to understand and his low muscle tone make speech and physical activity difficult. These difficulties can, at times, make living with Owen something of a challenge, and the challenge will only increase as Owen gets older. He will still need a great deal of support and my parents aren't always going to be there to provide it, as he gets older Eliot and I will need to provide more support for Owen, but still manage to live a life of our own.

Eventually, Elliot and I will have families of our own and all the stresses and worries that come with it but at the same time we'll still need to take care of Owen who will still be, for all intents and purposes, our baby brother.

Due to advances in medicine and societies views on people with disabilities, I'm part of what is really the first generation that will have a significant number of adult disabled siblings who will have the opportunity to lead as independent life as possible. This is an added responsibility not just for me as Owen's brother but society as a whole and we are still waiting to see if society is up to the challenge. Despite all the challenges it presents, I'm proud to be able to say I'm Owen's brother. He's great fun and certainly makes our lives a lot more interesting and I wouldn't change it for the world.