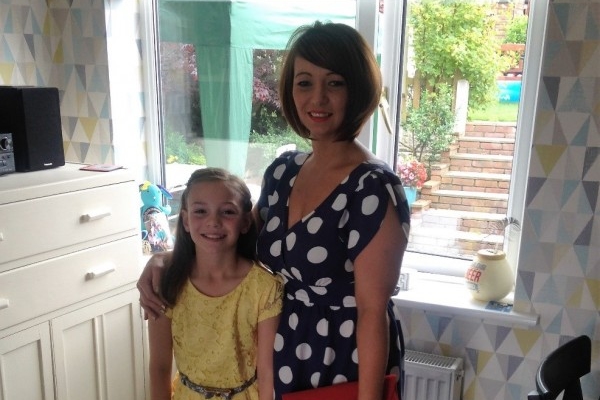 My daughter Maisie is 11 years old and was formally diagnosed with Autism, Sensory Processing Disorder and an anxiety disorder in March 2016.  Maisie is in mainstream education and has just transitioned to secondary school, which hasn’t been easy for her, but because she is receiving the right support it is going ok.

Maisie’s need for routine and her reliance on rituals are a major challenge for her, but they are also what helps her cope with environments that she finds difficult, such as school.  When talking about her rituals she tells us that she has a ‘black bubble’ in her head which tells her to do things which will help her feel better. Sometimes that will be having to do so many jumps on the trampoline or score a number of baskets in her basketball hoop, to help her de stress.   Maisie’s sensory issues means that she is upset by such things as loud or repetitive noises and ‘bad’ weather.  Dark clouds in the sky means that Maisie will become very anxious and she will fixate on the weather, worrying if it is going to rain, or will it become windy?  Her level of anxiety then becomes a real barrier to her learning, because she is unable to process information.  Being in a constant state of anxiety has impacted negatively on Maisie’s level of comprehension, her ability to concentrate and short term memory.

Her primary school had been very supportive, providing her with TA support and managing her anxiety by time-out and interventions such as ‘Cool Kids’ groups.  The problem was that it was starting to feel that she was spending more time out of the classroom than in it, and it was difficult to see what progress was being made.  When Maisie was finally formally diagnosed the report from CAMHS suggested that I discussed with her school about whether or not to request an EHCP assessment.

With only a few months left in primary education, her school was not keen to start this process, but I felt that following the report from CAMHs that it was now clear that Maisie’s needs were quite extensive and I was particularly worried about her ability to cope at secondary school.  I had spoken to the SENCo at the secondary school that Maisie would be attending and they had made it clear that they would not be able to provide the same level of support provided to Maisie at primary school, without additional funding.  With this in mind I contacted the ‘Information, Advice and Support Service Shropshire’ (IASS) for support.  They allocated me an Independent Supporter and I submitted a parental request for an EHCP assessment.

At this stage I informed the primary school that I had made this request and my Independent Supporter also contacted the school to talk to them about what was happening.  Following the discussion with IS the school did support the request for the EHCP assessment and together we provided information about Maisie to the SEN Team.

The first thing that I had to do as part of the request for assessment, was to complete the ‘All About Me and All About Us’ forms, sharing information about Maisie and our family; what was important to us, what worked, what didn’t work and what hopes we had for the future.  At this point I was particularly grateful that I had contacted IASS and had been allocated an Independent Supporter, writing everything down was so daunting.  We had lived with Maisie’s ‘difference’ for 11 years, she had been born with an eye condition that had mean she needed surgery as a baby, so things had not gone exactly right from the start, but that had been ‘fixed’.  As she got older we thought of her as perfect, but a little bit eccentric, wanting to be naked around the house, wearing a woolly hat in the summer and when her younger brother came along, not being able to cope with being in the same room when he was crying.   I look back now and I wonder how I couldn’t see it but I refused to believe that anything was wrong.  Even when Maisie went to school and the teacher asked to speak to me and Autism was first mentioned I didn’t want to believe it. The word Autism scared me – Maisie wasn’t like the children with Autism that you see on TV – so she couldn’t have Autism could she?  Maisie was our first child, she had become ‘our normal’ and I didn’t realise how much we had shut ourselves off from the outside world so that she could cope.

Having to write everything down in one place highlighted the scale of what we had been living with and that was a struggle and at times painful.  I was also worried that I would miss something, that I wouldn’t say the right thing and although I wanted to complete the All About Me, All About Us myself, being able to talk it through with the Independent Supporter was really helpful.  Actually in the end I found documenting everything quite therapeutic, it made me realise just how much Maisie needed support and that we were doing the right thing for her by asking for help.

After investing so much time and emotion in requesting an assessment it was a massive blow when, after 6 weeks, we received a response from Shropshire Council saying that they had decided that Maisie would not be assessed for an EHCP.  This was because they felt that the level of support needed could be provided by the school, as it had been up to this point.

The letter from Shropshire Council included information about the mediation process which you can use if you don’t agree with decisions.  I rang the mediation service straight away and arranged for their representative to visit.  The mediator was supportive and reassuring but it did mean going over things again, so that he could understand our case.  It was great, however, to not feel like I was having to deal with this alone and he arranged a meeting with the SEN Team and invited IASS to join us.

After the mediator visited I contacted the SEN Team to inform them that I was going to go through the mediation process and at this point was offered a meeting with a senior case officer.  They asked me to come in and talk to them and I am really pleased that I said yes, even though nobody was available to come with me and I had to go by myself.  The case officer really listened to me and put me at my ease, she took lots of notes and at the end of the meeting agreed to invite the school back to panel to provide further information.   It seems that the initial information provided hadn’t made it clear just how much support Maisie was receiving and that it was significantly above the level of support received by other children her age.  Schools do receive some funding in their annual budget to support children with SEN, but they hadn’t made it clear that they were using much more of this funding than would be expected on supporting Maisie.  Within the week we were notified that Maisie would be assessed for an EHCP.

We didn’t have time to relax however because we were straight into assessments.  It was the end of term so things were a bit chaotic and routine was out of the window, which is never good for Maisie.  Add in numerous visits to different professionals, so that up to date assessment reports could be provided, and it wasn’t the easiest of times.  One of the positive aspects of the timing however was that because Maisie was transitioning to secondary school the reports, particularly the one from the Educational Psychologist, didn’t just focus on how Maisie’s difficulties had presented to date but how they might present in the future in a new environment.  Finally, in the last week of the holidays we received Maisie’s draft EHCP and this meant that Maisie was able to start secondary school with the right support in place.

We are still finalising the draft EHCP because there were a few things that needed to change.  I was able to continue to have support from IASS and they went through the draft EHCP with me, making sure it was accurate and specific.  I have also continued to talk to the SEN Team and having this open communication has really been helpful and reassuring.

Overall I am very happy with Maisie’s EHCP, I feel more confident that she will continue to get the support that she needs and reassured that there is an agreement detailing what everyone involved in her care is trying to achieve.  I am looking forward to the first review when we can all look back over the plan and see what progress has been made.  I found as a parent, one of the hardest parts of contributing to the EHCP process was sharing my hopes and aspirations for Maisie’s future.  I had to keep coming back to that because thinking about the future is hard when you have a child with SEND, however since completing the EHCP the future does feel brighter and I feel more positive about looking forward.

Our EHCP journey hasn’t been straightforward and at times it has been hard to keep going with it, especially while continuing to manage the rest of family life alongside the process.  There are a lot of people out there that can help however and I think it is really important that families use the support that is available, I am certainly glad that I did because I feel that I couldn’t have done it on my own.