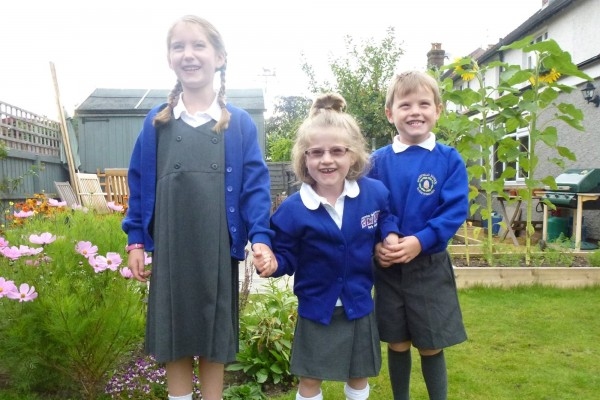 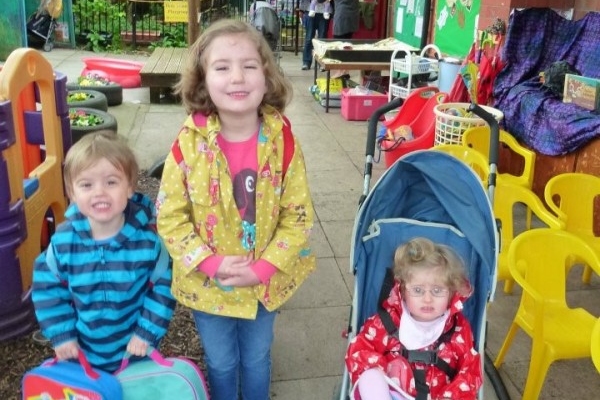 Our daughter, Nancy, is 6 years old and has undiagnosed global developmental delay. She is non-verbal and whilst she attempts Makaton signing, it is only really decipherable to her family and teachers and, even then, only really in context.  She wears AFOs to assist her poor, but improving mobility. She is incontinent and has the developmental age of a much younger child. All of this creates a complicated and often challenging life for us, especially with our two other young children who still need a lot of our attention, but Nancy is the happiest little girl you could meet, and those complications and challenges are ours, not hers.

Nancy was born at 35 weeks weighing just 3lb 8oz.  She is a twin, and whilst her brother was thriving in utero, she had stopped growing so I was induced due to concerns for her growth.

The Early Days
The next few weeks passed in such an anxious and exhausted blur that my memories of this time are pretty sketchy. Nancy was discharged after 17 days, some time after her twin, and the day I finally had all my family together under one roof was the happiest/most emotional/most terrifying day of my life – flying solo with what had been really quite a poorly baby. And her newborn twin.  And her two year-old sister!

Opening the door to the “Special Needs World”
I started to attend the Friday group with Nancy in the Autumn of 2010 when she was aged just one. That was our first peek through the door of the Special Needs World and it was terrifying. Having kept our head down for the first year and busied ourselves with the very busy business of having three children under 3, and whilst I wasn’t quite in denial, I just really didn’t have the time to consider what her evident and noted developmental delays might mean.  The Friday group was such a window on the possible future for us and Nancy.  There were so many children with obvious learning difficulties; physical disabilities and medical needs, of which Nancy was the youngest. We went to the first one and then didn’t go again for a long time until the run-up to the Multi-Disciplinary Assessment when she was about 2½ (18 months later), and even then we only went because we had been strongly advised to do so in order to make the Multi-Disciplinary Assessment a simpler, quicker process because they could take into account observations they could make of Nancy at our attendance at the Friday morning group sessions.

Early Years Education
We were extremely fortunate to have been exposed to a wonderful not-for-profit mainstream playgroup that Nancy’s elder sister attended, and, from Autumn 2011, aged 2, Nancy’s twin brother had started attending.  The playgroup manager asked me directly one day after Christmas why I hadn’t put Nancy in for a session too.  It seemed blindingly obvious to me, standing there with my non-verbal, non-mobile extremely vulnerable little girl, why I hadn’t put Nancy into Holy Trinity mainstream playgroup. I was given what I can only describe as a ticking off by the manager, by now a good friend, who reminded me that Holy Trinity playgroup was accessible to all children. Once I’d dried my tears (she got accustomed to keeping a box of tissues to hand whenever we subsequently met to discuss Nancy’s progress!) she asked if that’s what I wanted.  Of course it was. By then it was clear that it was unlikely that mainstream compulsory schooling would be right for Nancy, and this last academic year 2011/12 was the only time she would be at a setting with her big sister, who would start school that September, and generally the only opportunity she might have to be educated with her twin. I said “yes”, and, in very early course, (but not before the manager moved heaven and earth to make it happen with her 1:1 support!) I was told that Nancy could start at playgroup after Easter.

The Multi-Disciplinary Assessment and all the associated meetings and paperwork were taking place around the same time (Spring 2012), and consequently, we were able to state as our preference a split placement for Nancy – half at Holy Trinity and half at Severndale Assessment Nursery. Nancy was offered a place at the Severndale Assessment Nursery in March 2015, to start in the September. The professionals at the Child Development Centre were the first to raise the need for a Statement of Special Educational Needs, for Nancy to have the support she would need at Holy Trinity, and so that process was triggered by one of the CDC child development specialists in February 2012 and we received the Statement just after her 3rd birthday in the Autumn of 2012.  I was surprised at how long the Statementing process took. I was very aware that playgroup was absorbing the cost of Nancy’s 1:1 whilst the Child Development Centre seemed to be taking a long time to produce reports following assessments that we’d been to. It was all resolved by the Autumn, though, and then Nancy’s Statement was in place.

I think that had Nancy not had older siblings that had exposed us to a mainstream pre-school setting, and particularly a twin who attended the same setting, we probably wouldn’t have entertained the idea of her having a split placement.  It was, as it happens, the best decision we could have made because she benefited in different ways, comparing her sessions at the Severndale Assessment Nursery with her mainstream sessions.  It was important to us that she spent that brief time with her siblings (there was a 3-month period before Nancy’s big sister started school when they all had a session at Holy Trinity playgroup at the same time!) and she was nurtured with love and care by her key worker who would plan activities for her to do with Nancy, and who spent enough time with Nancy to know how to pique her interest in things and would work out ways to prolong her concentration on task. At the same time, it was abundantly clear that Nancy was getting exceptional support from the Severndale Nursery. I can see that they intensively focus on the nursery children to optimise their potential – whether that is the potential to go into mainstream education, or to give them the best possible start at the main Severndale School. Nancy’s development increased dramatically in her two, pre-school years.  The effect of this was that by the time the letter came to invite us to state our preference for compulsory schooling, we were confident that Nancy had maximised her potential at the Severndale Assessment Nursery, and it was clear to us that the right thing to do was for her to continue there.

Nancy is about to go into year 2 at Severndale School, which continues to nurture her, and could not be happier!